How would one explain about any Religion of this World?

What does this religion state? Or what is the Vision of this Religion?

When? Where? by Whom? Why? this religion was given to mankind?

Who is the head of this religion? Where is the abode of this Head?

Which is its primary temple?

Which is its primary literature?

What is its philosophy and theology?

What does it say about human life?

What does it say about salvation?

What theory it holds about past births and re-births?

What does it say about Heaven and Hell, Sin and Goodwill, Birth and Death, Earthly life…?

The person who could give clear-cut answers to these questions can alone become the head of the Indhu religion.

The language in which the explanations to all the above-said questions are available in easy to understand form is the primary language of that religion.

Periyaar was not an atheist. He only tried to bring out the True Indhuism from the wild imaginations, meaningless practices and dominations in the name of Hinduism. This Hinduism is also called as Pseudo Induism. 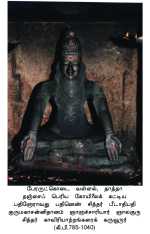