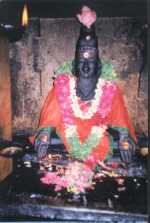 In addition to these, His Holiness has himself written books which give the detailed history of His predecessors, the 10 Pathinensiddhar Peedaathipathis; the history of pre-historic times, the changes that took place in the entire earth, the evolution of flora and fauna on this earth, etc. To give a detailed shape for all these histories, His Holiness worked hard for a few centuries to bring about a Divine Rule on this earth through the Later Chola Kingdom as the Divine Indhu Kingdom. His Holiness maintained all the details of His efforts and achievements as well as failures.

The only son of His Holiness Siddhar Karuwooraar was known as Karuvur Thevar. He has listed out the Teachings and Achievements of His father in a clear-cut chronological order. Through these writings only we learn about the Later Chola Empire and its proud achievements in unifying the Tamils. We also learn about the Sacred Temples built and the Sacred books written by His Holiness. Of the sacred books collected by His Holiness, Naalaayira Thivviya Prabandham and Thirumurai are still existing among Tamils. The Naalaayira Thivviya Prabandham contains the songs sung by 12 Aazhwaars praising the God Thirumaal. The Thirumurai contains the songs sung by the Four Samayakuravars praising the God Siva.

built by Him and the Sacred Books collections made by Him are all living till today and protecting the Tamils’ culture, Tamils’ Civilization, Tamils’ Society, Tamil Race, Tamil Language and the Tamils’ Religion known as the True Indhuism and the Tamils’ Literature. That is why the Tamils’ Identity remains intact and in proper shape and pride to command respect.

But after His Holiness’ lifetime, all these have got stunted and affected severely. That is why, the successor of His Holiness the 12th Pathinensiddhar Peedaathipathi who emanated from the same heredity, has been working through His Pathinensiddhar Mutt to bring about Divine Rule on this earth.

To function like the 10th and 11th Pathinensiddhar Peedaathipathis, His Holiness the 12th Pathinensiddhar Peedaathipathi has also instituted Indhu Renaissance Movement, Divine Services Forum, Movement for Tamil Race, Language and Religious Liberation, … etc. The disciples of His Holiness 12th Peedaathipathi are functioning all over the country to eradicate the ills and evils in the divine and materialistic world. Because of all these, there is a hope of self-confidence, self-respect, cultural heritage feelings, and unification of Tamils getting built up.

From this everyone realizes that through the Pathinensiddhars’ Siddha Philosophy known as True Indhuism only all the ills and evils can be removed totally. So, the first level of this work begins with the publication of the life and achievements of His Holiness Siddhar Karuwooraar of the Thanjavur Big Temple.

Wealth of knowledge can be acquired by bringing out the History of Siddhar Karuwooraar, His achivements, His Teachings, His Divine rule philosophy, Action plans, the books wrote by Him, the books collected by Him, His medical procedures, Divine Arts, Sevalone martial arts, the Temples built by Him, the Temples planned by Him, the stone statues sculpted by Him, the metal statues cast by Him, the efforts taken by Him to collect Thirumurai songs, His disciples Kambar, Perunthevanaar, 32nd Adisankarar, …. as separate books. One can also learn about Oagaasanam, Yogaasanam, Kundalini, Past births realization, Understanding of this birth, Knowing of next birth, … and other such divine arts. Working in this way only, one could truly worship and celebrate His Holiness Siddhar Karuwooraar of Thanjavur Big Temple.